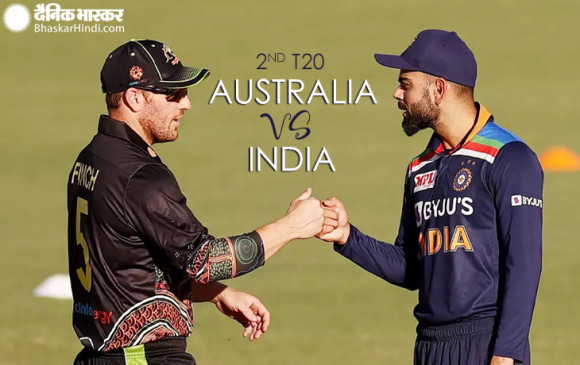 Digital Desk, Sydney. The second match of the 3-match T-20 series between India and Australia will be played at the Sydney Cricket Ground today (Sunday). Team India has a 1-0 lead in the series. Now Virat Brigade is eyeing the series to its name. This match will be played from 1.40 pm Indian time.

Team India may have lost the ODI series in Australia, but the team’s record in T20 is much better. India has not lost any bilateral T20 series in Australia for the last 12 years. If the Indian team wins today’s match, it will win the fourth series out of the overall 9 against Australia.

The concern of the team has increased due to injury to some players of Australia team. David Warner is already out of the series. Captain Aaron Finch also suffered a hip injury in the first T20. The situation is not yet clear on his playing. If Finch does not play, it would be a big setback for the hosts and then the weight of the team’s batting over Steve Smith.

Australian batsmen lost wickets in a hurry in the first match. In this match, the hosts would like to correct those mistakes. In bowling, the team got runs in the last over. The good news here is for Australia that Ravindra Jadeja, who scored a fast run for India in the last over, is out due to injury.

This is a relief for Australia, then a worry for India. On the basis of Lokesh Rahul and Jadeja, who started the innings with Shikhar Dhawan, India somehow managed to score a respectable score of 161 runs. Neither did Kohli nor the rest of the batsmen. In such a situation, Indian batsmen will also have to do better.

Yuzvendra Chahal, who was included as a concussion substitute in place of Jadeja, forced Australia to lose by taking three wickets in the first match. Chahal was not in the final-11. In the absence of Jadeja, will Chahal get priority? Apart from Chahal, T. Natarajan also performed amazingly.

Kohli had earlier fielded Jasprit Bumrah out in the T20. Whether or not Bumrah returns in the second match will also be known on the day of the match. Certainly India would like this match to have an unassailable 2-0 lead in the win series and the hosts will be trying to match.

Weather / pitch
The sky will be clear in Sydney. The maximum temperature is likely to be 30 degrees and the minimum temperature is 17 degrees. The pitch at the Sydney Cricket Ground can help batsmen. The team that wins the toss will want to bowl first.